Nature vs Nurture – Are Men and Women Really So Different? 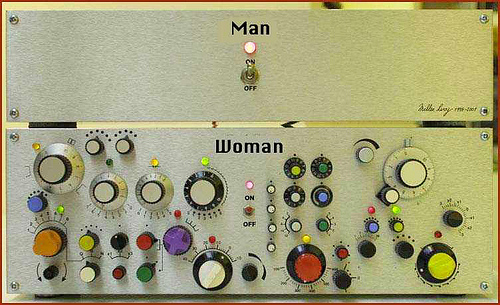 Nature vs Nurture – Are Men and Women Really So Different?

It’s always a great debate, and one that elicits some very strong opinions and emotions. Are men and women born radically different, or is it our environment that shapes who we become? Are men really from Mars and women from Venus? The truth, of course, is a bit of both, though the degrees will always be unmeasurable.

How our masculinity and femininity affects our relationships is significant. The masculine is very focused and direct, whereas the feminine is very encompassing and aware of what is happening around it. It is these polarities that draw us together, complement each other, and provide an opportunity to develop ourselves in many different ways. However they are also often the cause of much frustration in relationships, and in life in general, especially if we only look at the behaviour through our own interpretation of how things should be done.

‘The masculine is very focused and direct, whereas the feminine is very encompassing and aware of what is happening around it’

It is only in recent years that we have begun to get a better understanding of the differences of the male and female brains. The size, the structure, and the connections within the brains of males and females are consistently being shown to be quite different in many new scientific studies. There is always debate on how accurate these studies are, and whether there is bias involved, but there is clearly enough evidence now to say with some certainty that we are born with different wiring that guides our behaviours throughout our lives.

For example, it has been shown that females have 11% more neurons than males in the language and hearing centres of the brain. As a result women have a more acute sense of hearing, and a stronger ability to determine the nuances of emotion in someone’s voice. This is an essential skill in child rearing, and one that women are more naturally attuned to. I also find this a consistent source of frustration with couples who come to see me. The woman more often than not is exasperated with her partner’s lack of attention, and seeming inability to interpret the intentions of her words and emotions.

However this is not necessarily simply the man being difficult. A study in the Netherlands monitored the brain patterns of over 100 males and females between the ages of 17-27 while listening to a combination of music and white noise. The findings showed that females had an intense reaction to both the music and the white noise, however whilst the males had a similar intense reaction to the music, they almost completely detached from the white noise. There was little brain activity at all, as though they didn’t even hear it, indicating that men naturally are able to switch off any noise that they unconsciously determine is not important to them in that moment.

I’m sure there are many women reading this silently nodding their head in agreement, having much experience with their male partners seemingly switching off at will. Truly listening is a skill that many men are not strong in, and one that I often need to address with my male clients. Like any skill it is something that can be learnt, but it takes practice. Similarly I often have to work with their female partners to encourage them to speak in smaller blocks of dialogue, and to ensure they have the full attention of their partner if they have something important to say.

This, of course, is a generalisation and not true of all couples. I have had clients where the opposite is true. But they are rare. Other factors such as the family environment we grow up in and the culture we are exposed to also have a large effect on our behaviours. But the bottom line is men and women are different in many, many ways (just as we are similar in many ways also), and whilst this is generally a good thing, it can lead to all sorts of issues in a relationship if not properly understood and accommodated.

I am a strong believer that these differences are significant and important. But I also believe that we shouldn’t use them as an excuse for disrespecting or not meeting the needs of our partners. We are all capable of learning and improving in any area that our relationships are deficient in. And if our partner can see that we are making an effort to improve, that alone can transform a formerly stagnant relationship into something beautiful again.

Sessions can be conducted by skype, or two great locations in Melbourne, Australia: Prana House, 1/885 High Street, Thornbury and 1B Michael Street, Brunswick